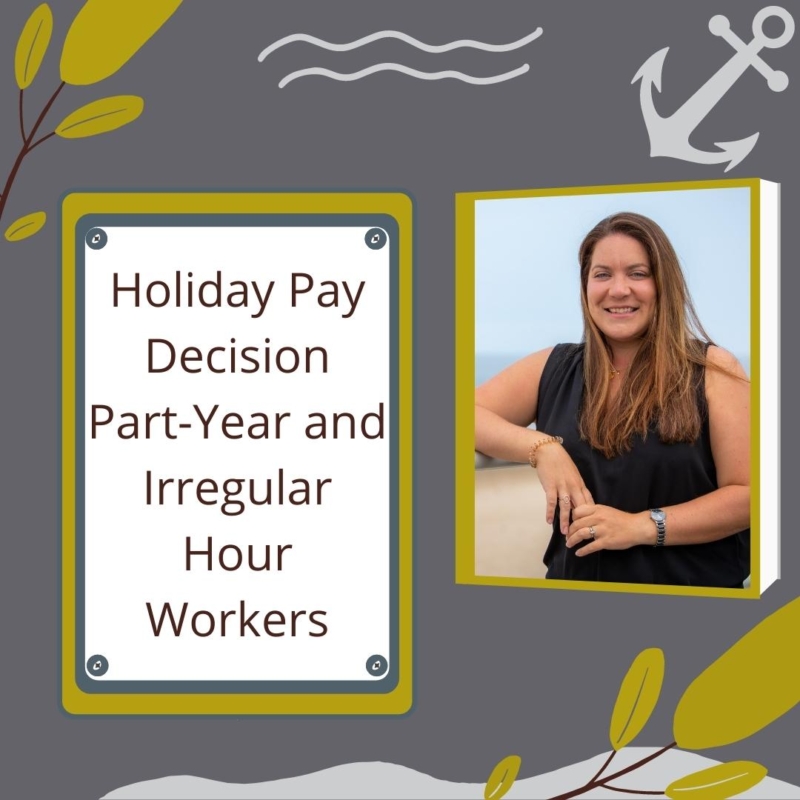 We have had a big decision recently after the conclusion of the Supreme Court case, Harpur Trust v Brazel.

The case centred around the holiday pay of term time only workers who had their holiday pay restricted to 12.07% of the hours they worked through the year.

The Employment Rights Act 1996 (ERA) tells us how we calculate what a week’s pay amounts to for the purposes of holiday pay.

Where a worker does irregular hours the previous 52 weeks should be used to create an average (previously this was a 12-week reference period). Where no remuneration was paid in a certain week, that week would be excluded and earlier weeks where the worker had been paid would be used.

This can cause issues for workers with irregular hours and what we find is that employers will calculate using 12.07% of each hour worked. 12.07% is used because that is the equivalent of 5.6 weeks of a full-time worker.

In this case, Brazel was a music teacher, she didn’t have set hours and would work term time only. She was paid monthly based on an hourly rate. She was still employed during school holidays but would not have duties and would not be paid.

She was entitled to 5.6 weeks holiday under her contract and she received payments calculated based on 12.07% for each term. She brought a claim stating that there had been a deduction from wages and that she should have been paid her holiday by reference to the preceding 12 weeks (which has now changed by law to 52 weeks). This would have resulted in more holiday pay for her.

The employment tribunal disagreed with her, but the Employment Appeal Tribunal and Court of Appeal disagreed.

The Court of Appeal found that a cap of 12.07% was incorrect and that even though the different method would mean the period working part of the year would be better off in terms of holiday pay than a full-time worker, they did not consider it to be unfair.

The case then went to the Supreme Court.

The Trust argued the holiday should be pro-rata to take into account that the person is not working every week of the year and to reflect the work done.

The Supreme Court disagreed. It stated that there was no room to interpret Government drafted legislation in any way other than as set out in the ERA and WTR which is by reference to calendar weeks.

The correct approach now for calculating part-year workers and workers with irregular working hours is to calculate using a 52-week average prior to the annual leave period and by ignoring the weeks when no work has been completed. The maximum number of weeks that can be taken into consideration is 104.

Where someone has not worked sufficient weeks, the weeks that have been worked should be used to calculate the average.

It’s warming up again this week! What if you think you’re too hot...
Scroll to top

This site uses cookies. By continuing to browse the site, you are agreeing to our use of cookies.

We may request cookies to be set on your device. We use cookies to let us know when you visit our websites, how you interact with us, to enrich your user experience, and to customize your relationship with our website.

Click on the different category headings to find out more. You can also change some of your preferences. Note that blocking some types of cookies may impact your experience on our websites and the services we are able to offer.

These cookies are strictly necessary to provide you with services available through our website and to use some of its features.

Because these cookies are strictly necessary to deliver the website, you cannot refuse them without impacting how our site functions. You can block or delete them by changing your browser settings and force blocking all cookies on this website.

These cookies collect information that is used either in aggregate form to help us understand how our website is being used or how effective our marketing campaigns are, or to help us customise our website and application for you in order to enhance your experience.

If you do not want that we track your visit to our site you can disable tracking in your browser here:

We also use different external services like Google Webfonts, Google Maps and external Video providers. Since these providers may collect personal data like your IP address we allow you to block them here. Please be aware that this might heavily reduce the functionality and appearance of our site. Changes will take effect once you reload the page.